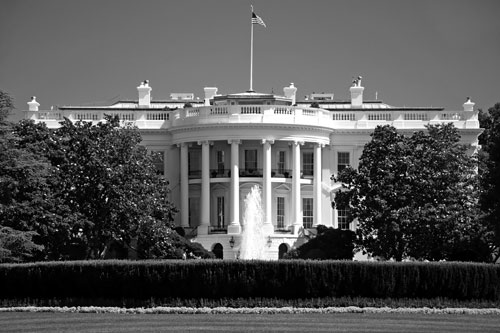 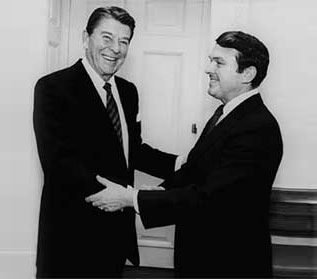 Robert B. Carleson devoted his life to public service. While reforming the California welfare system in the early 1970’s under Ronald Reagan, Carleson pioneered measures that saved the state from bankruptcy. Twenty-five years later, he was instrumental in designing the 1996 welfare reform that brought about the greatest change for good in America’s system of helping its neediest citizens since the 1930’s.
Carleson, a native of Long Beach, California, in 1949 received naval scholarships to University of Utah and University of Southern California (USC). In 1953, he received his degree in public administration from USC and a commission in the U. S. Navy. From 1953-56, he served in the Far East and Korea, including two years with the First Marine Division in Korea, Camp Pendleton in California, and a one-year tour on the heavy cruiser U. S. S. Bremerton, which included combat in Korea. After his naval service, he did post graduate work in public administration at the University of Southern California and was an administrative intern in the Beverly Hills City Administrator’s office.
He served as Administrative Assistant to the Director of Public Works for the City of Beverly Hills from 1956-57. After working as City Clerk and Assistant to the City Manager of Claremont, California from 1957-58, and as Senior Administrative Assistant to the City Manager of Torrance, California from 1959-60, he was City Manager of San Dimas, California from 1960-64, and City Manager of Pico Rivera, California from 1964-68.
Carleson joined the administration of Governor Ronald Reagan in 1968 as Chief Deputy Director of the California State Department of Public Works (now the Department of Transportation).
Carleson first received notice in welfare policy as the chief architect of Governor Reagan’s successful welfare reform program, and its principal implementer as Director of the California State Department of Social Welfare in 1971-72. As a result of the success of California’s reforms, he was brought to Washington, D.C. by Secretary of Health, Education and Welfare Casper Weinberger to be U.S. Commissioner of Welfare from 1973-75 with instructions to carry California-style welfare reforms to governors and state legislators around the country. During his tenure in Washington, the national welfare rolls dropped for the first time since World War II as they had done in California during his tenure there.
Click here to read Robert B. Carleson’s full biography.

Meet the ACRU Board of Directors →

Tributes to Robert B. Carleson

No one who studies the rise of modern conservatism in the latter half of the 20th century could deny the importance of Robert B. Carleson. His tireless campaign to reform welfare stands not only as one of conservatism’s first tests, but also one of its first and everlasting successes. Yet his death Friday at the age of 75 has received scant public attention. This is unfortunate. As many have remarked, without a Bob Carleson there might not have been a President Ronald Reagan. (excerpted from The Washington Times)
Read the lead editorial from The Washington Times.

Leadership: This year marks the 10th anniversary of welfare reform, one of the conservative movement’s top domestic achievements. The indispensable man was Robert B. Carleson. Carleson, a thoughtful public servant, didn’t need the academics to teach him human nature. (excerpted from Investor’s Business Daily)
Read the lead editorial from Investor’s Business Daily. (PDF—115kB)

Gov. Reagan was definitely the father of genuine welfare reform in America—the “tough love” concept of ending cash subsidies except for the truly needy and creating incentives with which those on welfare could find work and thus be freed from dependency. […] And if Reagan was the father of these innovative reform concepts, then its midwife was Robert B. Carleson, his state director of social welfare. […] The welfare reform that he and Reagan sculpted in California has been copied and implemented in numerous states, notably New York under Reagan’s old political nemesis, liberal Republican Gov. Nelson Rockefeller, who took the advice of then-U.S. Commissioner of Welfare Carleson. Many of the revolutionary innovations that were developed in California were applied on a federal level in the 1980s, when Reagan was President and Carleson his special assistant for policy development.
Click here to read the full article from Human Events. (PDF)

An unheralded poverty warrior has passed away. Robert B. Carleson did more to shape welfare policy in this country over the past three decades but news of his death did not draw long, detailed obituaries in most major newspapers. Welfare “rights” organizations will not pay homage to this man whose work helped start many onetime welfare recipients on the path to self-sufficiency. It is not Politically Correct to identify conservatives who advocate work to be compassionate but millions of Americans owe Carleson a debt of gratitude for spearheading consistently the concept of workfare. (excerpted from Accuracy in Media)
Read the rest of Paul M. Weyrich’s tribute.

The Man Who Gave Us Welfare Reform

Bob Carleson was no mere number-cruncher or policy wonk. He was, in fact, a passionate man, which is not surprising since we worked for a president who was passionate about freedom and America. Bob had an incredible love for our country, believing, as Reagan did, that we had a special “rendezvous with destiny” that required us to be a “shining city on a hill.” He was also passionate about the poor. Like most conservatives, he had to endure constant attacks from the political left, which attempted to smear him, along with Reagan, as cruel and hard-hearted. But Carleson cared so much about the poor that he devoted the majority of his adult life to trying to reform the failed programs that were creating generational poverty and cycles of dependency. (excerpted from The Weekly Standard)
Read the rest of Gary Bauer’s tribute.

Robert Carleson—How One Man Altered the Path of History

Robert B. Carleson, a man who was as responsible as anyone for the presidency of Ronald Reagan, passed away late last month. Though his friends and fellow conservatives understood his key role in changing the course of history, he was little known to the general public. And yet, as his fellow “Reaganaut” Edwin Meese (former Attorney General) declared at a memorial in Carleson’s honor April 26, if there had been no Bob Carleson, “there would have been no President Reagan.”
Read the rest of Wes Vernon’s tribute. (PDF)