A wide range of interest groups appear intent on trying to sabotage the work of the Presidential Advisory Commission on Election Integrity. (AP Photo/Andrew Harnik)

We are saddened that Maine Secretary of State Matt Dunlap, our colleague on the Presidential Advisory Commission on Election Integrity, has filed a widely-reported complaint against the commission. Even more dismaying, his complaint and statements to the press contain inaccurate information and outright falsehoods. It seems intended to inhibit, if not outright sabotage, the commission’s valuable work of examining our voter registration and election system to recommend improvements that will ensure electoral integrity.

In the suit, Dunlap states that he has been “blocked from receiving Commission documents” and hasn’t been allowed “substantive participation.” This is simply untrue. He also claims that a majority of the commission members “have a history of working to restrict access to the ballot box.” This statement is false, defamatory, and hardly conducive to promoting a productive, bipartisan inquiry into an important topic.

When one of the above authors predicted in a private email in February that some Democrats named to the commission might not be inclined to “do anything other than obstruct any investigation of voter fraud,” that prediction missed the mark. Had that email said “if you name a Democrat, they will probably end up suing the Commission, leaking to the media, and lying about its activities in court filings,” the wailing and gnashing of teeth from election fraud deniers and the media would have been even worse.

But that prediction would have been accurate.

Dunlap’s choice of legal counsel in this case is also telling. The “American Oversight” advocacy organization bills itself as a shield against the Trump administration’s “culture of impunity” and founded only months after Trump was sworn into office. The group boasts old hands from the Clinton legal team and bears scars from Whitewater, Lewinsky, and Email-gate, National Review notes.

Here are a few of the falsehoods in Dunlap’s complaint.

Dunlap portrays the fact that several commissioners submitted documents at the meeting itself as some kind of conspiratorial, nefarious action. As explained here, this claim is preposterous. One of the authors submitted a printed copy of The Heritage Foundation’s election fraud database; this database is online here and has been online for almost two years so any member of the public can access it. That a secretary of state was unaware of this expansive catalog of documented election fraud only makes it worse. Contrary to Dunlap’s inflammatory suppositions, which he has trumpeted to the press, facts are not preordained “conclusions.”

It seems Dunlap is also unhappy about the fact that he apparently did not receive a submission by Christy McCormick, a commissioner on the U.S. Election Assistance Commission, ahead of time. But what McCormick submitted was simply the 2016 election report of the EAC, that had previously been submitted to Congress, and which was also a public document easily available on the EAC’s website.

Perhaps what is really upsetting Dunlap is the fact that the EAC report shows that the voter registration rate in Maine is 101.6 percent of the citizen voting age population—which means that Maine has more people registered to vote than are, in fact, eligible to vote. This fact certainly casts doubt on how thoroughly he is maintaining the accuracy of Maine’s voter rolls.

It seems Dunlap was also upset that he wasn’t provided with a copy of a law review article that Commissioner Ken Blackwell submitted at the July 19 meeting. He neglects to mention, however, that this article has been available online for any and all to see since 2009. Dunlap, by the way, made an opening statement at the July 19 meeting—he did not submit it to the commission ahead of time.

Dunlap also complains about the second meeting of the commission on Sept. 12 in New Hampshire. He claims he had no input into the agenda and received no “substantive information about the meeting” including “prepared testimony.” We would note, however, that if Dunlap failed to provide input into the agenda for this meeting, that is entirely his own fault.

At the first commission meeting on July 19, Dunlap voted to adopt the by-laws of the commission, which clearly provide, in Section IV, Part (C), that the chair (or the vice chair at the chair’s direction) of the commission sets the agenda for each meeting but that “items for the agenda may be submitted to the Chair by any Member.” Moreover, an updated agenda was emailed to all of the commissioners a week before the meeting. The only document Dunlap sent to the commission was a copy of an article about a misleading flyer sent to college students in Maine—and that document was immediately posted on the commission’s White House webpage here.

At the first meeting on July 19, many commissioners spoke constructively about the issues they wanted covered by the commission. New Hampshire Secretary of State Bill Gardner, for example, expressed his interest in what effect voter confidence in the integrity of the election process may have on voter turnout. Dunlap expressed an interest in issues involving the chain of custody and the counting of ballots as well as “the need for a better understanding o
f our cybersecurity needs.”

The turnout/voter confidence issue was covered at the Sept. 12 meeting by three witnesses. The cybersecurity issue that Dunlap raised at the first meeting was also covered by three different witnesses, and the dangers posed by cyberattacks on ballot counting was covered by Andrew Appell, a computer scientist from Princeton University.

Another false claim made by Dunlap relates to the shocking arrest of a longtime Justice Department employee who was detailed to the Office of the Vice President to provide staffing for the commission. Ronald Williams, a career DOJ employee who had worked in both the Civil Rights and Criminal Division, was arrested at the beginning of October for allegedly possessing child pornography.

In an interview with ProPublica on Oct. 17 and with New Hampshire NPR on Nov. 9, Dunlap claimed he had never been told about the hiring of Williams or any other staff member besides Andrew Kossack, a counsel in the Office of the Vice President assigned to the commission as the “Designated Federal Officer.”

This is a bizarre claim: We were sitting in a room on July 19 when Williams was introduced to all of the commissioners, including Dunlap. 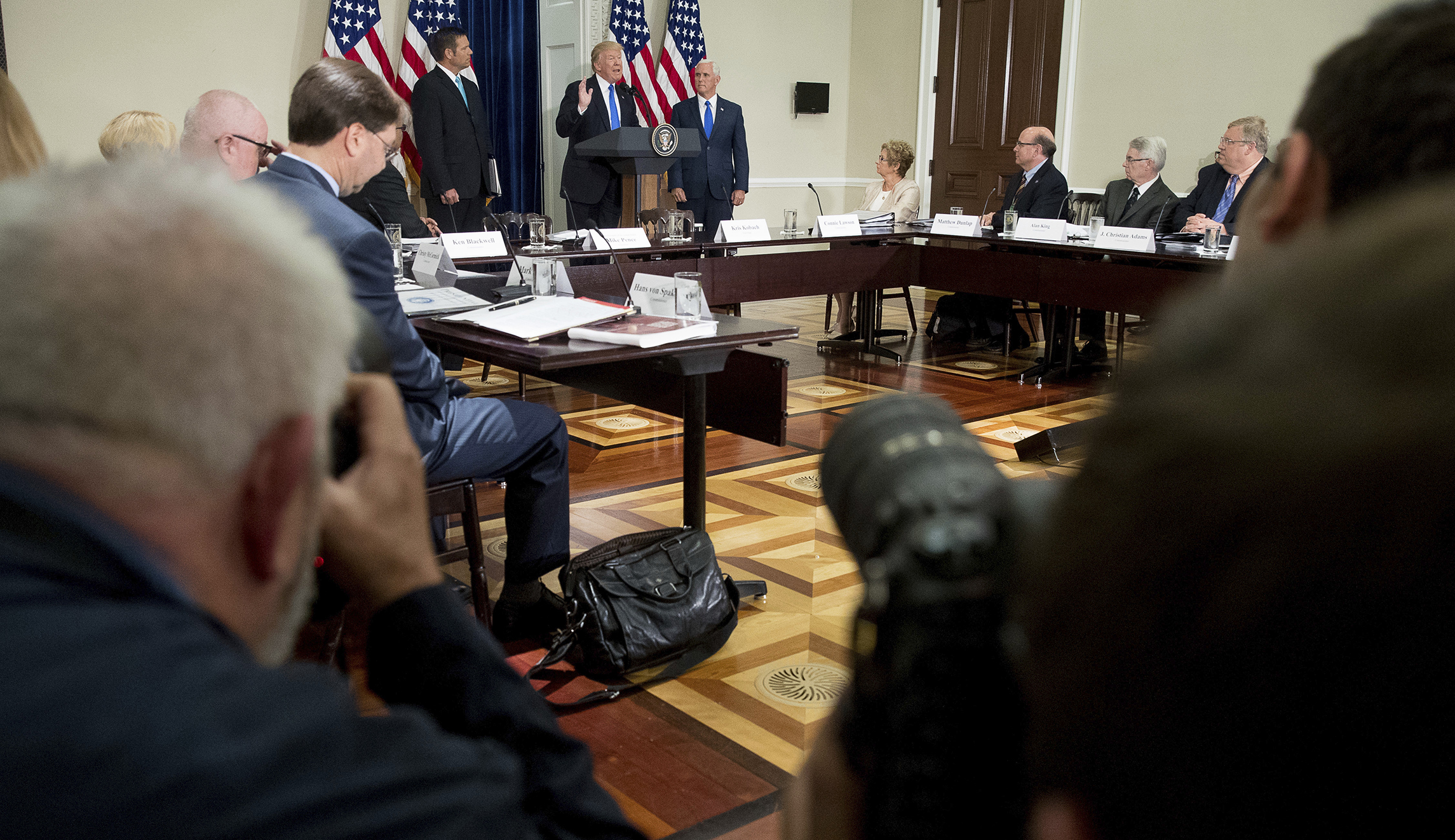 Dunlap, sitting third from right, at the July 19 meeting. Williams was introduced later at the same meeting.(AP)

Williams sat within eight feet of Dunlap in the vice president’s office while we undertook hours of ethics training. There is even a photograph of Williams sitting right behind Dunlap at the July 19 public meeting.

Apparently, Ron Williams was the Invisible Man to Dunlap.

As for Dunlap’s claim that the public is being excluded from the commission, members of the public can submit comments, information, and documents to the commission that they believe are relevant to what we are examining. The Commission webpage has posted all of the comments that have been submitted.

A wide range of interest groups—from academics, to faux-media outlets, to partisans, to foundations and the activist groups they fund—appear intent on trying to sabotage the work of the Presidential Advisory Commission on Election Integrity. The only plausible reason for this is that they don’t want the public to learn more about vulnerabilities in our elections that allow election fraud and other administrative errors and mistakes to occur.

Thankfully, the overwhelming majority of Americans are properly concerned over the election process and reject the premise that election fraud is a myth. That isn’t a preordained conclusion; that’s a fact.

And that’s why we will continue, relentlessly, to try to get to the bottom of how we can improve the security and integrity of our election system.